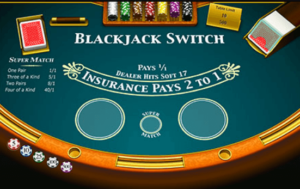 The game of black jack switch is like the normal game of Black jack but wherein the player is permitted to interchange cards between two hands. Though this move is normally considered to be illegal, permitting one to do just this also adds a twist to the game which makes it more interesting. Strategies change and the player has to review this new game to understand it. The game is popular on blackjack sites.This version of the game is a newer one when compared to the traditional normal black jack game with a twist to it. Only after playing it can a player decide on which game he prefers. Is it the old game or the new one with the option to switch cards between hands?

Understanding the Difference Between the Two

To be able to understand where the difference lies between the two one would have to first have a fairly good knowledge of the game which is the original one. One could either go over the rules online or do a brief refresher. Once this is done the player can go on to the game of blackjack switch on any of the blackjack sites. The traditional blackjack game has been popular and played all over the world, however, in recent times casinos have created several variations to break the monotony. The new variation called black jack switch permits players who are playing two hands with equal bets on both, to switch a second card which they are dealt from one of their hands to the other one. If the player knows how to utilize this properly he can turn two hands which are of no value into winning hands.

The Advantage is Evened Out

However, there are rules which even out the advantage of this game. While playing a conventional game a score of 22 for the dealer would end up in a draw or a push as it is referred to. This means the bet would have been won by the player. The other rule which evens out the advantage of a switch, is, that only even money is paid and not the usual ratio of 3:2. The switching of cards needs special talent so that you do not end up with a wrong switch and what you do change is advantageous to your game.